ISMO | The Silent Struggle (with English)

Oh man, have you heard of French though?

More silent letters - but more logical. In French you can normally guess how an unfamiliar word is said: less exceptions by far :) The English silent letters are more arbitrary, especially if we count in names. Would you thoroughly wrestle an' honestly guess all the subtle silent le''ers in this tough sentence where foreigners ought to acquire the knowledge which witch is the witch which should be dropt? :)

Waiting in line to be heard, and disappointed to learn they are basically irrelevant.

Frank With The Violin

This guy is so creative. Very funny!

Ismo looks like a Hobbit, but I mean that in a good way.

I can hear Yoda in you

Thank you for Kaapo Kakko!!!

Which L - do you say bely or bely?

My bey is fat

I saw some videos of Finnish songs with subtitles, and I'm jealous how efficient the writing is. All the letters seem to make more or less the same sound all the time, and none of them are silent.

Yep, if you see a word in Finnish that you have never seen before or spelled before, you can still say it right the first time because everything is spelled the same way it's written.

Also the stress is usually on the first syllable, so that Helsinki is pronounced HELsinki and not HelSINki (most English speakers mispronounce it the second way).

My math teacher used to say his name was Fra3nk spelt with a silent 3.

Finnish double letters are much easier than English silent letters, as they are way more consistent, and once you get the muscle memory down in your head it's super easy. They're simply an extended version of the letter, if there are two letters, simply take the letter's sound and extend it twice as long. If the letter has a "pop"-like kinda sound like T/P/K, you simply hold your tongue before making the pop sound for a moment. If the letter has a "humming"-like sound before the pop like B/D, you hold the humming sound for a moment and then do the pop. It seems complex, but it's actually very simple, and with just a few days of practice you can get it down really quickly!

If you get a chance go see him, his hilarious!😂😂

I’m a native English speaker and I can actually relate to this as I thought the same thing when I was learning how to read and write....it was a constant “WTF...why?” And now after learning another language that “WTF why?” Has become even bigger because I can really see now how absurd English spelling is.

Every language has its oddballs, it’s just English has way more

Should try French then lol, if anything else might make you feel better

How about French? Ha! My maiden name is Robitaille. The last 3 letters are silent 😏 my mother is Finnish so I know the struggle is real 😀

OMG, that was hilarious. Thanks for the laughs.

I'm getting flashbacks to some of Victor Borge's old routines, and that is not a bad thing.

You are REALLY GREAT!!

Your outro gave me a 70's flashback. https://www.youtube.com/watch?v=xgxAe2Duyyk

I have spoke english my whole life and I still dont understand it.

I'm from the United states. I speak English and bad english. I don't talk English good yet

You are so funny and sweet.

Camping On A Budget

Okay, I have seen all of your English speaking posts. They are absolutely hilarious. I love them.

Years ago I had photo taken with Ismo. It was a good day!

Petri Tikkanen , definite and indefinite articles are quite necessary. It is just you Finns not getting it.

English has like no grammar at all, so it's easy. Finnish has hardly anything but grammar...

That actually exists because of pronunciation reasons. It's easier for the natives to combine two vowels with a consonant, which is why you use aN before a word that starts with a vowel. For the ones starting with a consonant you don't need it anymore. Try to pronounce *a hour* (where the H is silent) and *an machine* (where you have two consonants one after another) out loud and then pronounce them according to the rule and you'll see the difference.

Dude I'm trying to learn Finnish and you do have silent letters. Like you write kaksikymmentäyksi but everyone says kakskytyks. That's a lot of silent letters dude

@Bror I guess you just decided to ignore my parethesis, huh? I am not from Finland and I can neither speak nor write in Finnish. If my misspelled finnish abbreviation of the number 26 somehow offended you.... Too bad. Good call on the "fins" part though. I left out an "n" by accident.

@Mikael Karlsson Fins can´t say anything.. fishes have fins...and 26 is not shortened to kakskytkos but kakskytkuus...

Spoken Finnish uses different rules to some extent. Words are shortened in many cases, and the way you conjugate words is a bit different, in favor of making the words shorter. It's not really about silent letters, it's that Finnish has spoken variant of word "kaksi" that's "kaks", spoken variant of "kymmentä" that's "kyt", and spoken variant of kuusi "kuus". The guideline is that when speaking, it's more important that forming words is easy and fast, but in writing, it's expected that the writer spends extra effort to make the text easy to read, so written language has features that are essentially discarded when speaking because of the tradeoff between ease of forming sentences vs comprehending them is scaled differently. You can write "kakskytkuus", and you can say "kaksikymmentäkuusi", but when speaking, you're usually just using the short version, and if you wrote that down, there's expectation of making it easier to read by using the full version rather than saving some letters.

What I would give to spend an afternoon drinking beer and eating sausages with you Ismo. You seem like a world class human being. I can’t wait to see you in Sydney later this year!!!!

I'm a Malaysian and English has been my second language since I was seven. It's interesting to see other non-native speakers' experiences on the language..

TerryFGM Well, he kind of just said it. He called himself a non-native speaker 😊

Why would anybody imagine learning French? Usually people are sane and sane people especially.

@MrDisasterboy English seems to use double-o with Opera. Not sure, I'm not native speaker so I'm a bit unsure how English speakers pronounce the word.

Luca Brasi thx. When I was in Helsinki I asked a Finnish friend and they said it was usually pronounced just like in English. But I am good with , both Os being pronounced in correct Finnish. You'll know better than me and hearsay. 😀✌️

If you mean Ooppera, O its not silent. We say both Os 😃

Write something new for a change, ya fat fuck.

Write it down but oshshsh lol

These are pretty old jokes. It is a great bit but nothing new ismo has not done previously

Just come to my neighborhood. We use a subtle and honest technique to master your knowledge of our foreign language.

Oh boy, if you don't like silent letters let me warn you strongly against the French language!

Mario Milanista French is as confounding as English, it seems. Only it sounds nicer (at least to me 😊)

@Nicole Milman and if u try to write it in plural it become Les Yeux ... so a lot of things doesn't even have an explanation in french not only silent letters

timomastosalo ok I am warned 😊 I am used to talkative Finns since my family seems unusual in that department. Loud and talkative. And from a place called Pylkönmäki, about an hour from Jyväskylä. Paljon Onnea sinnulle 💐

Elvea Skyefal Great tip. I will start using that to A, E and Is too, because there is no way to tell how they should be pronaunced on different times. A=I I=E E=I ... Silent is golden.

No need to give up. Just learn the regular patterns, and the silent letter words and irregular pronounciation you learn one by one. Many of them are loan words from some other language to English. Like pizza. There they don't say the z like normally. A drunken pisser might call himself pizzer. Just pick first those you think important. The rest, when they come along. And you will likely not need to learn them all.

Best outro I've seen on a YT video in quite a while.

@ColdHeart Oh my gosh! That completely escaped me until you commented! Brilliant! Thanks. Now I enjoy it _even more_ :-)

Yep it was a clever joke also. "click on something" XD

:-( I'm sorry. It's in the same style as the old black & white movies that didn't have sound. I thought that was a clever way to carry thru the whole "silent" theme he was exploring.

I think its scary

Just wait until he learns French.

He’s been talking about french in Finnish

"GAULOISES" the word that still haunts my mind, like, as a kid I was tong-twisting to say it and then as a grown-up discovered it was FRENCH and I needed pronounce like 5 letters from that ? Oh, also recently discovered some "native" Irish stuff, CAOIMHE = yeah, that's a (female ?) name.. It's pronounced.. you don't wanna know :P :D

Oh wow! I can imagine! What a treasure of linguistic material ! 😂😂😂 it would be fucking hysterical !

French is a silent language, its not meant to be spoken

Ismo, you're the best!

TerryFGM no no, it's *Ismo* 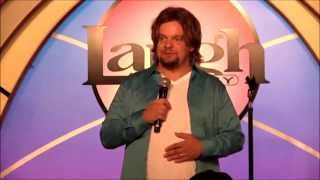 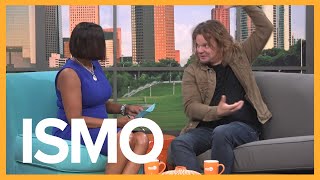 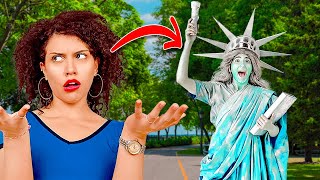 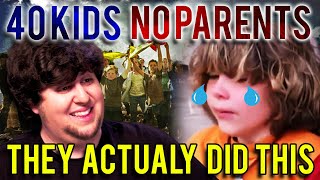 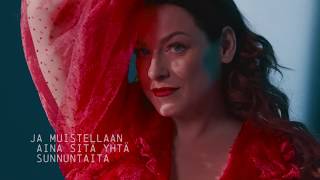 Ismo: Ass Is The Most Complicated Word In The English Language - CONAN on TBS

Types of Students in Online Classes

SUPERBABIES: The Superhero Movie of Your Nightmares